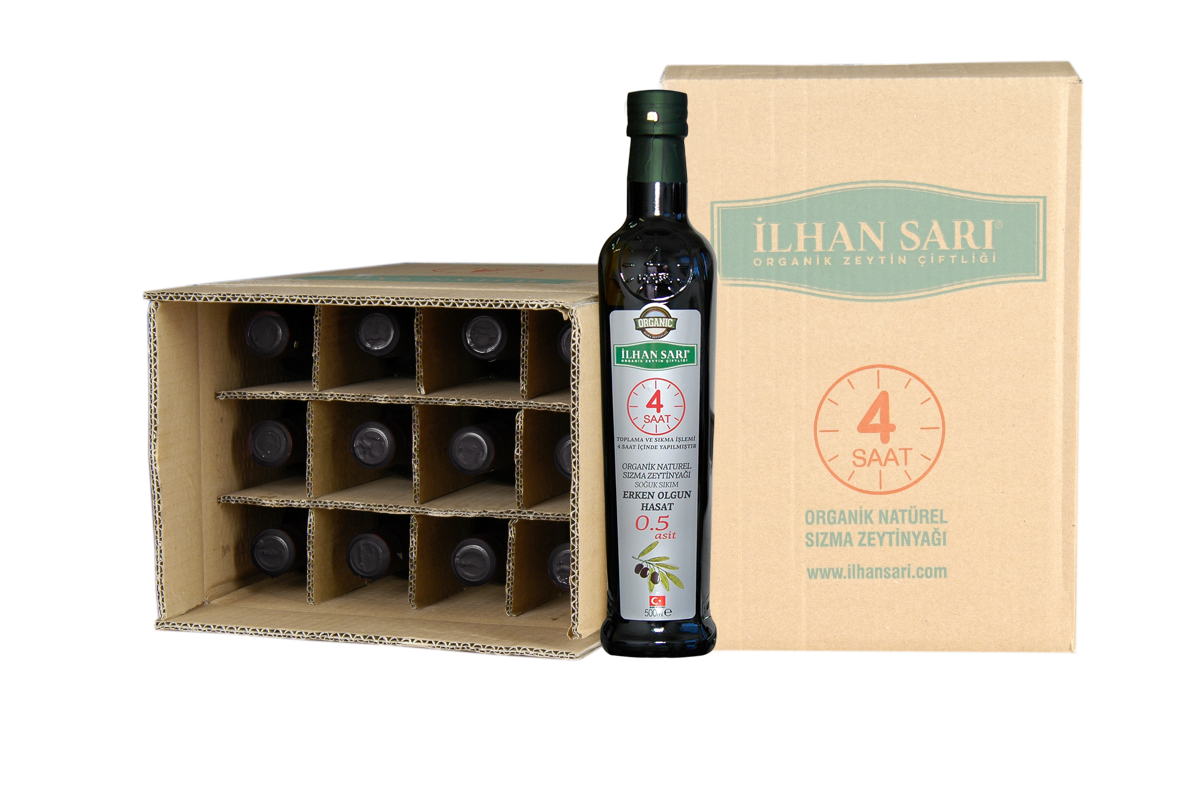 Tightening Technology : With high technology, cold squeezing in an oxygen-free environment without touching hands and without using any heat.

Harvest Period : The collection and squeezing process has been done within maximum 4 hours.

It is sold in 500 ml dark colored glass bottles. 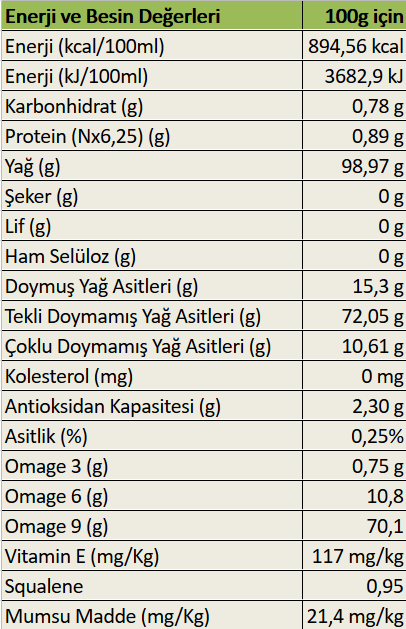 From the moment the organic black olives are cut from the branch, the time until the olive oil is removed is max. Since it is 4 hours, this organic olive oil contains abundant chlorophyll and 1.93g Antioxidant per 100g. (4 Hour Organic Olive Oil Analysis-TÜBİTAK data) The olives were harvested carefully by hand from the olive branch in the most mature period. Since it is harvested from the olive branch, it has very low acidity since it does not oxidize due to the oil obtained within 4 hours. It is a yellow-colored health potion with low acidity, mature flavor, in which the essence of olives is contained, in which some sediments accumulate at the bottom of the package over time, containing phenolic substances.
Olive oil not only adds flavor to the food, but it is also effective in delaying the aging of tissues and organs in the regeneration of cells thanks to the vitamins A, E, D and K it contains. It nourishes the skin and protects the hair. Thanks to the linoleic (Omega6) acid it contains, olive oil does not increase the rate of cholesterol in the blood, on the contrary, it keeps it under control. One of the most important features of olive oil is its positive effect on cardiovascular diseases. It is extremely inconvenient to remove olive oil from meals in slimming diets. Again, olive oil can be used effectively in the removal of intestine, urinary tract, gallbladder gastritis. One tablespoon of olive oil contains 14 g, 125 calories. It has been observed that those living in Mediterranean countries have a lower risk of heart attack compared to other countries.


* It is effective in concept.

* İlhan Sarı Organic A product containing functional olive oil is a storehouse of vitamins A, E, D and K. Especially vitamin E has a very high rate. Therefore, it provides cell renewal and delays the aging of organs.

* In the USA, olive oil was used as an important supplement in the war against Alzeimer and positive results were obtained in experiments with mice.

* In order to maintain brain protection feature, it should be consumed regularly.

* It is used in gallbladder disorders. It cleans the muddy state of the gallbladder by regular use for 1 month. It reduces the risk of gallstones.

* It provides strengthening of nails.

* Delays the effects of osteoporosis.

* It can be used easily for cracked lips.

* It has been proven to help prevent the formation of cancerous cells in prostate cancer.

* It is effective in cardiovascular diseases thanks to selenium in our olive oil. It reduces the risk of vascular stiffness and heart attack. It prevents the rhythm disturbance.

* It can be used as a supplement to ostrogen hormones thanks to ostrons during menopause.

* It has a pain relieving feature.

* Olive oil can be applied against bee and mosquito stings.

* The FDA stated that drinking 2 tablespoons of olive oil a day reduces the risk of heart disease.

* Olive oil can be applied on an empty stomach in liver diseases.